Sofia Kasimi, a long-distance runner, will achieve at the age of 42, two goals and two dreams on September 27-28.

The finish at the Spartathlon, the historic 250 km road race that crosses 5 prefectures, starting at the Acropolis and ending at the statue of Leonidas in Sparta. And raising public awareness for the support of 5 organizations that have demonstrated important social work in Attica, Corinth, Arcadia, Argolis and Laconia. 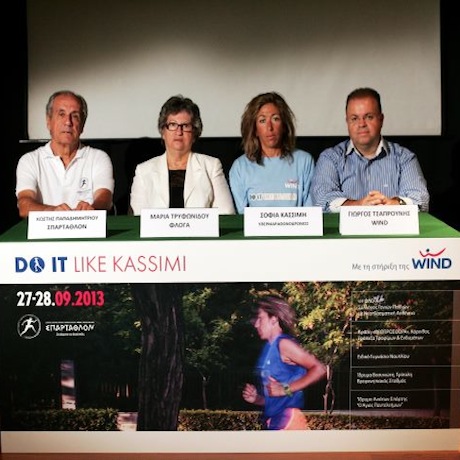 The ultra-marathoner accepted WIND‘s invitation to run for the third time one of the toughest road races in the world, in order to send a strong message of offer and social solidarity. So, on September 27, she will be at the starting line of the Spartathlon in order to raise money for 5 social organizations. The effort of Sofia Kasimi as well as the mechanism through which the donations will be made by each interested party is described in www.doitlikekassimi.gr which was created for this purpose.

“I invite everyone to contribute €10 to raise money for our fellow human beings who need it. It will give me tremendous strength to know that my fellow human beings have participated in this action. My every step will be to offer everyone to lead me to the coveted goal of finishing in Sparta after a day and a half “, Sofia stated during the Press Conference for the announcement of the action www.doitlikekassimi.gr

On his part, the Director of Corporate Communication of WIND George Tsaprounis spoke about the initiative of the company that has embraced the road movement for years. “WIND will triple the amount that will be collected and will give the publicity that these social actors so desperately need, who work silently every day to save the lives of people next to us. Sophia is the ideal ambassador for this energy because she, in addition to being an excellent athlete, has sensitivities and a disposition for social contribution”.

The bodies supported by the energy DO IT LIKE KASSIMI in the context of SPARTATHLON, belong to each of the 5 prefectures referred below that cross the route of the race:

The potential “sponsors” of the super-marathon runner Sofia Kasimi, have the opportunity through www.doitlikekassimi.gr to make their own donation, either through PayPal or through a simple deposit, offering €10 for each half km of the route. There is no limit to the kilometres that one can “grant”, while each part of the route can be covered with multiple sponsorships.

Sofia Kasimi runs for a purpose
Scroll to top

This site uses cookies. By continuing to browse the site, you are agreeing to our use of cookies.

We may request cookies to be set on your device. We use cookies to let us know when you visit our websites, how you interact with us, to enrich your user experience, and to customize your relationship with our website.

Click on the different category headings to find out more. You can also change some of your preferences. Note that blocking some types of cookies may impact your experience on our websites and the services we are able to offer.

These cookies are strictly necessary to provide you with services available through our website and to use some of its features.

Because these cookies are strictly necessary to deliver the website, you cannot refuse them without impacting how our site functions. You can block or delete them by changing your browser settings and force blocking all cookies on this website.

These cookies collect information that is used either in aggregate form to help us understand how our website is being used or how effective our marketing campaigns are, or to help us customize our website and application for you in order to enhance your experience.

If you do not want that we track your visist to our site you can disable tracking in your browser here:

We also use different external services like Google Webfonts, Google Maps and external Video providers. Since these providers may collect personal data like your IP address we allow you to block them here. Please be aware that this might heavily reduce the functionality and appearance of our site. Changes will take effect once you reload the page.