Super marathon runner Sofia Kassimi – one of the three women who will take part in this year’s Spartathlon – talks about her previous experiences in long distance races and the active support from her daughter, while revealing her “nickname” as an athlete.

“I have been a runner for over 25 years and participating in the Spartathlon has always been a dream. In 2009 I decided to dare to start. This attempt was not successful, as I did not manage to finish. I was not disappointed though. I saw what mistakes I made on the route and the next year I tried again. Unfortunately, I had problems again and did not finish. In 2011 everything went well and after 35 hours I reached the finish line and touched the feet of the statue of Leonidas”, says Sofia Kasimi, just two weeks before attempting once again, with the valuable help of WIND and for charity, to follow the path set by Pheidippides in 490 BC, when he started from Athens to go to Sparta in order to ask for help for the war against the Persians. “There are 75 stations (every 4-5 km), 75 points on the route which if you do not reach them within a specific time frame, you are excluded from the race. The most difficult point is around dawn when you start to climb Artemisio Mountain. Last time I had the misfortune to turn off the flashlight I had on my head. I could not see anything and because there was a cliff on one side of the road, I could not run so I crawled. I first put my hand in front of me to see if I could walk. So I lost an entire hour until I came down from the mountain. This meant that from dawn until noon I could not stop for a minute. “I did not change my clothes, nor did I stop at a station when my nose opened and blood was flowing so that the doctor could put a tampon on me”, she says and continues her story: “We do everything by running: we eat by running, we drink by running. Some even eat beef stakes. I have been a vegetarian since I was 15 and this never stopped me from doing championships. I’m crazy about animals and decided that I did not want to eat them anymore. In the race I usually eat rice with honey, a lot of pineapple, bananas, dates, orange. On the second day of the race I can not chew, so I eat baby food, soups and yogurt.” 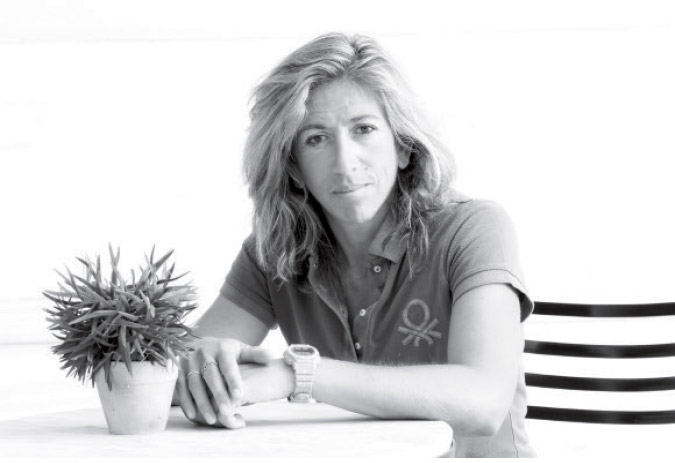 I asked her how and when she started playing sports: “I started at a very young age, after a success in a school championship where I won a medal. It seemed that I had talent and I was helped a lot by both my parents and the school. However, I did not start with distance races. I have done almost everything, while for years my official race was the Marathon. For me, running is a way of life. I grew up that way. When I was a little kid, five or six years old, my father, who was also a runner, picked me up at his feet and started every conversation with the phrase “when you grow up and become an athlete…”. And if as a child was asking for some forbidden food, e.g. French fries, he used to argue with me saying “athletes do not eat these”. That’s how I grew up and became an athlete too”, she concludes and in her words joy and pride are mixed.

“After the birth of my daughter, the strongest feeling I have experienced was when I reached the finish line in 2011. Dimitra is 13 years old and has grown up in a car following me with the team in the big races. And when the volume reaches the red and everyone runs in panic, she is the only one who keeps her composure and knows where the slightest thing is in the car. In fact, she ran the last two kilometres at the Spartathlon with me and told me “stop, I will not be able to continue, stop for a while”. She has an appeal in sports, since both her father and I are athletes, but I have not pushed her to the championship. I would like her to see sports as fun and decide by herself if she wants to take it more seriously”, she explains and continues: “I never felt that I was deprived of something, that I made some sacrifice. Yes, I could not smoke, drink a lot, mess up or stay up all night and go to a race or workout the next morning. But that gave me more joy.” I asked her if she ever felt tired, if she ever thought of giving up. “At one point I was suffering from some injuries and so I decided to give birth to my daughter and then rest my body for a while”, she answers honestly and continues: “After my daughter started to grow up, the idea of ​​long distances started to come to me – until then I had only reached the Marathon. I have always had a love for the many kilometres. Imagine my nickname as an athlete was “insatiable”. The coach told me to “relax a bit” to finish the workout, and sometimes instead of ten minutes I could run for an hour. So I tried the long distances, did well and continued. One of the most beautiful routes I have done four times is the 100 km Del Passatore that crosses the Apennine Mountains. It starts in Florence and ends in Faenza. But nothing compares to the Spartathlon”, she says and her gaze is already “running” from Athens to Corinth, Nemea, Nestani, Tegea, Sparta…

info: For more details about the route of the Spartathlon, but also about how one can contribute to the charitable purpose for which Sofia Kasimi runs this year with the support of WIND, type: doitlikekassimi.gr

This site uses cookies. By continuing to browse the site, you are agreeing to our use of cookies.

We may request cookies to be set on your device. We use cookies to let us know when you visit our websites, how you interact with us, to enrich your user experience, and to customize your relationship with our website.

Click on the different category headings to find out more. You can also change some of your preferences. Note that blocking some types of cookies may impact your experience on our websites and the services we are able to offer.

These cookies are strictly necessary to provide you with services available through our website and to use some of its features.

Because these cookies are strictly necessary to deliver the website, you cannot refuse them without impacting how our site functions. You can block or delete them by changing your browser settings and force blocking all cookies on this website.

These cookies collect information that is used either in aggregate form to help us understand how our website is being used or how effective our marketing campaigns are, or to help us customize our website and application for you in order to enhance your experience.

If you do not want that we track your visist to our site you can disable tracking in your browser here:

We also use different external services like Google Webfonts, Google Maps and external Video providers. Since these providers may collect personal data like your IP address we allow you to block them here. Please be aware that this might heavily reduce the functionality and appearance of our site. Changes will take effect once you reload the page.